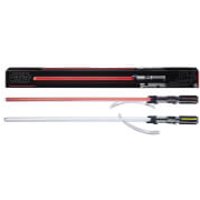 Recreate the biggest battles and missions in Star Wars with this lightsaber from The Black Series! Though a formidable lightsaber combatant, Darth Vader lacked the finesse of most of his opponents. He relied instead on the raw strength of the Dark Side to crush all who opposed him. You can feel like Darth Vader with this Force FX Lightsaber, featuring light and sound effects and metal hilt. Imagine the thrill of a heated battle. Enhance any Star Wars collection with this and other lightsabers from the Black Series. Each sold separately. Star Wars products are produced by Hasbro under license from Lucasfilm Ltd. Hasbro and all related terms are trademarks of Hasbro. Features: Official replica of Darth Vader's lightsaber from Star Wars:The Empire Strikes Back Glowing, bright blue blade ignites with realistic power-up and power-down effects Features four motion sensor-controlled sound effects: power-up, idle hum, clash and power-down Durable metal hilt looks and feels like a real lightsaber, along with a sturdy, permanently attached blade When not in your grasp, proudly show off your galactic weapon in the specially designed base