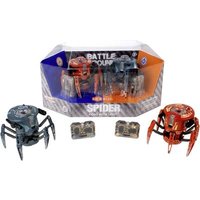 You can see, how sci-fi before their eyes to life! Each spider has a remote control and is operated with futuristic sounds and sound effects. High-tech infrared technology enables the battle spiders actually "fire". Damage detectors measure every hit and ensure that each match with only one bot ends. The legs and sensory capabilities, you will swear with huesch that these robots are real; all you have to do is pull even back and react with each shock! Fight spiders have a range of 1 meters and can once per second or continuously up to the hit shoot. In the case of a hit is the battle spider for one second stunned. After 10 hits, the Battle Spider switched off and a true-to-life heart rate light will flash rapidly and the individual fighters to leave! A unique, battle-tried deco and hi-tech life sensor, which measures, contributes to the ultimate fight happen every hit. The sechsbeinige spider has 360-degree steering and a LED-forward eye, with which you can control objects maneuver and exactly where you fight against their opponents huscht, if you. Each battle spider has a two-channel infrared remote control. The two-channel remote control allows the user to operate independently of each other, several spiders or at the same time. HEXBUG Battle Spider corresponds to the cpsia standards.This text is machine translated.