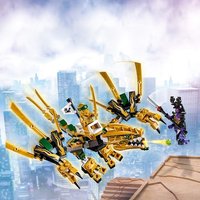 Ride into the Final Battle against evil Overlord with Golden Ninja Lloyd on the LEGO Ninjago The Golden Dragon (70666)! Beware of Stone Army Scout's crossbow and Overlord's blade spear. Attack with the wing blades and tail swords. Then surprise the enemy by firing the dragon's mouth shooter. Use the Golden Power of the Ultimate Spinjitzu Master and win this epic fight! This LEGO Ninjago Legacy action toy includes 3 minifigures: Golden Ninja Lloyd, Overlord and Stone Army Scout as well as a minifigure saddle, opening mouth with hidden stud shooter and posable wings, legs and tail. The weapons include Golden Ninja Lloyd's gold-colored katana, Overlord's blade spear and Stone Army Scout's crossbow and the accessory elements include Overlord's 2 torsos, 4 arms and ghost-like 'legs'.