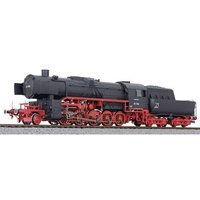 In 1943 the heavy kriegslok series 42 with 17t axle pressure. It was intended for use in Austria, but also in occupied areas where the superstructure. The Plan, 8000 locomotives to build (later reduced to 5000 locomotives), was built by the end of the war stopped and it was ultimately a little over 860 pieces. The locomotives were at the DB up to about 1970 to 1960 and at DR.This text is machine translated.