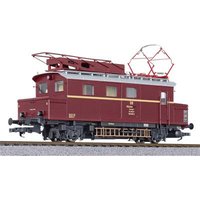 The advancing electrification of the main, but also the branch lines in Germany required maintenance vehicles to ensure a more optimal condition of the overhead line. The old vehicles from the beginning of time retire, by the Deutsche Reichsbahn therefore at the end of the 20's new buildings. It was, among other things, a very special "Tower wagon", whose drive (in the front end housed) accumulators fed. This in turn could - through the integration of a rectifier into the vehicle - completely independent of stationary charging systems directly over the pantograph can be charged from the overhead line.The Battery Tower motor cars were equipped with a crew compartment and a complete workshop. They were mostly individually on the move, but due to the built-in control clutch and buffer if required, for example, material wagon as a precaution. While the cars of ZWILLING J.A. Maffei were manufactured, the electrical equipment of SSW (Siemens Schuckert plants) and the batteries of depreciation (Batteries Factory AG).The models of our models were built between 1929 and 1933, it created a total of six vehicles, which partly in small details differences. They were stationed in Munich, Wroclaw and Augsburg. From the epoch III were partial modifications made, e.g. additional sockets mounted on the front, an open tool box mounted on the chassis on one side or the lamps replaced. Saw the vehicles at your service runner-up at the beginning of the 70s, partly in some details vary. Unfortunately, none of the interesting vehicles museum- have been preserved.The Liliput models are as our prototype with rotating work platform and flip-up stage railings, so that both the work situation at the top cable as well as the drive operation or the secondment, e.g. in the fahrleitungsmeisterei or the bw true to prototype.This text is machine translated.

Do NOT follow this link or you will be banned from the site!
Privacy Policy and Cookies - By browsing this site you accept cookies used to improve and personalise our services and marketing, and for social activity. Read our privacy policy for more about what we do with your data, as well as your rights and choices – including how to manage cookies.Accept and CloseRead more