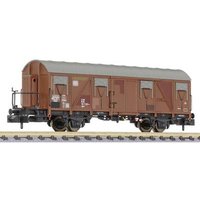 The Glmhs 50 or Glmehs50 is a covered goods wagon of the standard design. He was from the DB between 1953 and 1960 in a number of well over 12,000 pieces procured and is one of the most commonly built covered goods wagon of Germany. He served for the transport of goods of all types, which are not exposed to the weather conditions. Thus, you can use it confidently as a so-called "bread and butter wagon", in almost all freight trains of Eras III to V was used and often in trains, for example, together with Gs and other Gbs-Wagen-driven.The first cars had walls made of Pine and spruce wooden boards, the designs from 1954 then synthetic resin Laminated plywood boards. About a third of the car had a hand brake stand with brakeman's cabin. In the 1970s, all verb rescue types wagon with the plywood boards are converted and the brake link frame users have been removed.The car was the usual G-wagon standard, it is with his lob of 12,500 mm between the shorter gs (LOB 10.580 mm) and the longer Gbs (LOB 14.0200.10 mm). It has been over the years a few times renamed and umnummeriert. So he received in 1965, depending on the design, among other things, the designations Gbs Gbrs Gbrs-V245, 245, 245 or 245 and then from 1980 e.g. Gos Gos-uv 245.On the basis of various car manufacturer, there are the original minimal differences in the designs, also, many of these vehicles sold to private companies, so that it can be used both in the DB as well as private a variety of promotional labels and coatings. The vehicle was used as railway service vehicles. Characteristic were the light metal roofs with 13 Spriegeln and the four sides, lockable ventilation openings. At the beginning of the 80s were a number of cars sold to the DR, at that time, there was a lack of goods wagons. The last coaches of this type were at the DB AG in 2000 and 1995.This text is machine translated.