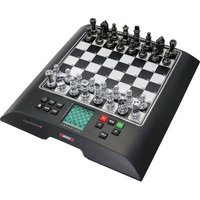 One of the most powerful chess computers of all time with the world champion software "Chess Genius" by Richard Lang!Following the highly acclaimed launch of THE MILLENNIUM ChessGenius in late autumn 2015, we are now introducing the significantly optimized and performance-enhanced version of ChessGenius PRO. Many customers have expressed requests for additional hardware and software features that have been incorporated into the development of the new model. In addition to a more elegant look, the Genius Pro offers a significantly higher playing strength, it reaches over 2,200 ELO according to international tournament standard. This has been achieved through a variety of hardware and software modifications:Hardware enhancements:• significantly faster processor with 120 MHz clock frequency (factor 2.5 faster than the ChessGenius)• 160 KB RAM (factor 5 more than in ChessGenius)• Automatic power supply detection – the plugged-in power supply switches off sleep mode for 24 hours, for long-term analysis.• Significantly improved sensor board with smooth pressure pointSoftware enhancements:• Three different options for opening:• No opening book, computer calculates independantly• "Classic London Book", approx. 57,000 positions (corresponds to the previous ChessGenius, the library has been increased by a factor of 2.8)• “Modern Book”, more than 100,000 positions, completely new library with modern opening variants. By HIARCS.• Generally improved sleep mode with extended wake-up phases• Display of train numbers in INFO mode• New level Especially for problem solutions (Matt in X) Optical improvements:• Set of figures with chrome plating (white figures) and black chrome plating (black figures)• Figures equipped with felt baseThe sum of all measures results in a significant increase in performance compared to the established model, so that the "Pro" is the perfect choice, especially for ambitious players.The improvements in handling and appearance are of course also good for all players, who do not only attach importance to top performance. The new options make the Pro much more varied and exciting than the Genius. The few opponents that have failed the Genius so far will get a new task!Game levels & difficulty:- Almost unlimited number of difficulty levels¬- Average time per train can be set variably- Max. Total time per game can be set variably- With challenging tournament levels for strong players- Special "Matt in X" level for problem solving- Numerous levels especially for beginners - Display of draft suggestions (best, second best, third best, etc. move in the respective position) Especially for chess professionals- 2 opening galleries, "Classic London" with 57,000 opening positions and "Modern" with more than 100,000 positions- Versatile analysis mode - Display of position evaluation, main variant and train number- Enter any chess positionsEspecially for beginners- Chess trainer: Warns of bad trains, offers their take-back and makes suggestions for improvements for better trains - Help function: Display of all legal moves- Fully variable possibility of withdrawalThis text is machine translated.