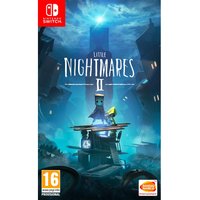 Dive into the unsettling world of Little Nightmares II, the direct sequel to the critically-acclaimed horror puzzle-platformer - Little Nightmares. You play as Mono, a young boy that must navigate through a city that's been warped by the transmission being broadcasted from a distant tower. With the help of Six, the girl in a yellow raincoat from the first Little Nightmares game, he will uncover the sinister truth behind The Signal Tower. Each location brings its own set of puzzles that Mono and Six must solve together as they travel through this nightmarish place. Beware though of its horrifying residents, who will stop at nothing to bring Mono and Six's journey to a terrifying end. The Little Nightmares II: Day 1 Edition gives you exclusive access to the Nomes' in-game puzzle. Upon completing it you'll unlock the Nomes' hat, which Mono can wear as you progress through the main game. You'll also receive a mini digital copy of the game's soundtrack, so you can immerse yourself in Tobias Lilja's haunting music - composed especially for Little Nightmares II.