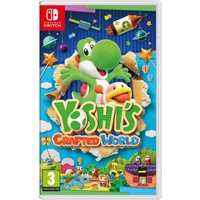 Get crafty with Yoshi in Yoshi's Crafted World, a new side-scrolling platform adventure for the Nintendo Switch.Join Yoshi and explore a colourful cardboard world made up of household items like paper cups and boxes. Yoshi's stomp can flip your perspective, allowing you to seek out previously hidden coins and secrets. And if you want to team up with a friend - just pass your friend a Joy-Con controller for co-op fun.Kamek and Baby Bowser have wreaked havok over Yoshi Island in an attempt to steal the Sundream Stone, a magical artefact that can make your wildest dreams come true. It's up to you to help Yoshi and his friends recover the gems of the Sundream Stone, solving puzzles and collecting treasure along the way.