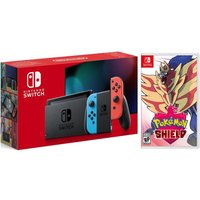 Get ready for a new adventure with the Nintendo Switch & Pokemon Shield Bundle._______________________________________________Nintendo Switch - Neon Red & BlueThis new version of the Nintendo Switch has all the same great features of the original Switch, just with a much longer battery life. Depending on your game, you'll get from 4.5 up to 9 hours of battery. Now when you're stuck on long journeys, you'll have even more gaming time.The Nintendo Switch is designed to go wherever you do. With the ability to transform between a home console and a portable system, the Switch lets you play your favourite games for longer.Connect the HDMI cable to your TV to enjoy a traditional console gaming experience, or prop up the stand attached to the back of the device to play games on its built-in screen. When the time comes to leave the house, you can carry on gaming by attaching the twin Joy-Con controllers to the console and using the 6.2" screen.With two wireless Joy-Con controllers, the Switch makes it easy to share a gaming experience with a friend. Featuring standard buttons and a directional joystick, each controller also has motion sensing and high-definition tactile feedback.The Nintendo Switch comes with 32 GB of internal memory for all of your gaming needs. This can easily be expanded, using microSDHC or microSDXC cards to add storage space to suit your needs._______________________________________________Pokémon ShieldChoose from one of three starter Pokémon - Grookey, Scorbunny or Sobble. Then begin your adventure through the Galar region. You'll find many unique locations, such as huge grassy plains filled with nature, and towns and cities where people and Pokémon work and live together!Another characteristic part of Galarian culture is the way Pokémon battles are regarded as the most popular form of entertainment across the whole region. And in Galar, there's a unique phenomenon, where Pokémon are able to become literal giant versions of themselves (known as Dynamaxing).The Dynamax phenomenon, which allows Pokémon to become tremendously powerful, is an integral part of Pokémon battles in the Galar region. Dynamax Pokémon don't just become bigger—they get a boost in power as well. But they will return to normal after three turns, so make sure think carefully about when to trigger the Dynamax phenomenon.