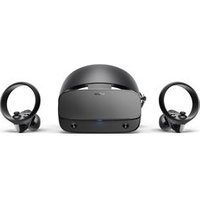 Immersive virtual reality with upgraded visuals Always wanted to try VR? Well here's your chance. Explore new worlds and play games in a whole new way with the Oculus  Rift S . It's been upgraded from the original Rift, with improved optics so that what you see looks even better, with graphics that are brighter and more colourful. Pull the comfortable headset on and Oculus takes over, putting you in a fully 3D world. As you move around in real life, you move in the game too ¿ so you can literally duck to dodge obstacles, or reach to grab something. Realistic gaming with accurate controllers But it's not just the headset that's tracked in your games. There's two controllers included, so you can reload a laser gun with a realistic movement, control a steering wheel just like in real life, or learn how to box with Rocky ¿ and it all feels as natural as possible. And because the Oculus Rift S has built-in speakers, the audio of your game literally surrounds you ¿ if an enemy is approaching from the left you'll know exactly where to shoot. Thousands of games and apps available to play Whether you want to take on fantasy sword fighting games, play around with robots, explore space, or just tackle puzzles in a 3D world ¿ the Oculus game library has something for everyone. There are terrifying games that make you feel like you're actually inside a horror film, as well as guided meditation experiences to help you calm down afterwards. And there's even family friendly experiences, and educational games for the whole family to enjoy.