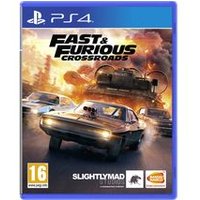 Join the family The action-adventure movies have joined the gaming universe.  Fast and Furious: Crossroads  offers fast-paced cinematic action, with high-stake stunts, heists and more. You join the family to help to hunt down an international crime syndicate, and in true Fast & Furious style, there's all the heroes, cars and mayhem you'd expect. You'll hop between stunning locations, including the sands of Morocco and the streets of New Orlean - your hunt will take you across the world. You can jump online with your friends for even more action. Create your own crew for multiplayer action against other crews. You'll be able to track all your stats, history, achievements and more thanks to the MOSAIC system - perfect for keeping track of your success. Characters Dom, Letty and Roman are all voiced by the original cast members, so  Fast and Furious: Crossroads  perfectly fits into the Fast and Furious universe. There's new crew members too, including characters voiced by Asia Kate Dillon (Orange is the New Black & Billions) and Sonequa Martin-Green (The Walking Dead & Star Trek: Discovery), so there's voices you'll recognise too. Cars and gadgets Dennis McCarthy (the official Fast & Furious car co-ordinator) has helped to curate the vehicles that you'll use in your persuits, escapes and heists. You'll be able to use some of the gadgets from the movies, and there's some new ones to help you take down your enemies.