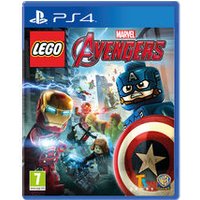 Dive into the action with LEGO Marvel Avengers for PS4, featuring characters and storylines from the smash hit movie Marvel's The Avengers, Avengers: Age of Ultron and more. You'll get to play as the most powerful superheroes on Earth ¿ in LEGO form ¿ as you battle to save the planet. The game delivers a unique open-world experience that lets you roam freely as one of Earth's Mightiest Heroes to collect gold bricks, studs, and unlock additional characters. A huge roster allows you to control and unlock more than 100 characters including fan favourites like the Hulk, Iron Man, Captain America and Thor. There are also new characters from Marvel's Avengers: Age of Ultron and many others, giving you more fun choices than ever. Each Marvel superhero comes with an array of exciting capabilities - LEGO Marvel Avengers for PlayStation 4 showcases new and enhanced powers that let you take on opponents in new ways and team up with core Avengers to pull off insane combos. Avengers Assemble!