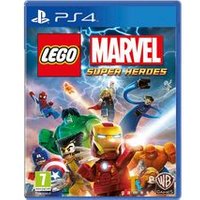 Letting you take control of iconic Marvel heroes, including Iron Man, Spider Man, Wolverine and the Hulk, set out to save the world and thwart the plans of Loki, Dr Doom and other nefarious super villains in Lego Marvel Superheroes for PS4. Marvellous mayhem Featuring the LEGO game play and unique humour that has made other games in the series so popular, you'll be able to control a vast and varied choice of characters from the Marvel universe, each with their own special abilities. NYC Set primarily in New York City, you're initially tasked with finding cosmic blocks before the band of villains led by Loki and Dr Doom, as they try to create a Doom Ray of Doom. From there the adventure progresses and you'll have to take charge of a host of heroes as you battle against various villains in different locations as you eventually unearth a scheme that could lead to the destruction of the world itself.