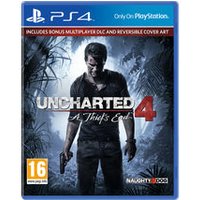 Adventure comes calling again for Nathan Drake in Uncharted 4: A Thief's End . Treasure seeking Three years after the events of Uncharted 3: Drake's Deception, Drake's brother Sam has resurfaced, seeking help to save his own life and offering a new adventure for the retired fortune hunter. Hunting for Captain Henry Avery's long-lost treasure, the brothers set off to find Libertalia, the pirate utopia deep in the forests of Madagascar. The Drakes Nathan Drake finds himself suddenly forced back into the world of thieves ¿ this journey will test his physical limits, his resolve and ultimately what he's willing to sacrifice to save the ones he loves. Five years older than his brother Nate, Sam Drake was previously thought to be dead ¿ a belief that may have caused Nate to pursue a life of treasure hunting to begin with. Sam has been described as ¿more reckless than Nate and a little jealous of his brother's achievements¿. Be prepared to be taken on a journey around the globe, through jungle isles, urban cities and snow-capped peaks to uncover Avery's fortune in Uncharted 4: A Thief's End .