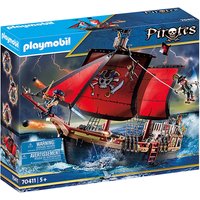 Playmobil pirates set: !The dangerous pirates with their skull and crossbones are the terrors of the seven seas . As soon as their threatening red skull with a threatening skull loomed on the horizon, all the sailors died of fear. The cunning pirate captain and his crew are always on the hunt for the next treasure or ship to take by storm. With their pivoting cannons, pistols and sabres, the pirates throw themselves headlong without fear of fear in each battle. ! PlaySet includes a pirate ship, three PLAYMOBIL characters, a splint, a parrot and two rats. The boat floats on water and can be fitted with a radio controlled submersible motor (9853). For more flexible journeys in the children's room, the hull of the boat is equipped with castors, which allow the boat to move effortlessly on the ground.Pirate ship with four pirates, two cannons and many accessories. With cabin under the rudder. The hold in the middle of the ship opens to play inside. The boat floats.Suitable for ages 4 and up.Note! Not suitable for children under 3 years: choking hazard!