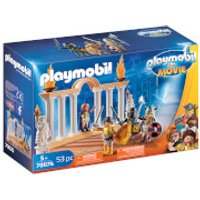 Included Marla in knight's armor, Charlie, and the Black Knight in Maximus' colosseum. Arch Dimensions: 10.2 x 2 x 8.1 in (LxWxH). / 26x5x20,5cm (LxWxH). By chance the siblings Marla and Charlie are drawn into the magical, colourful PLAYMOBIL® universe and separated. To find Charlie again, Marla must embark on the adventure of a lifetime. On her incredible journey she also meets the crazy-mad Emperor Maximus and his people in the Colosseum. Will Marla succeed in passing all the challenges, finding Charlie and coming home again? PLAYMOBIL: The Movie© is the first animated film inspired by the imaginative PLAYMOBIL® world and takes viewers on an epic, fun and unforgettable adventure. Meet Marla, Charlie, Del, Rex and many other new friends and retell their story every day new.The play set contains the film characters Marla, Charlie, Emperor Maximus and the Black Knight, a collosseum element, two standing figures with columns and many other extras. Features: Dimensions (LxWxH) cm: 27x12x16,5 Recommended for ages 5+

Playmobil: The Movie Emperor Maximus in the Colosseum (70076)