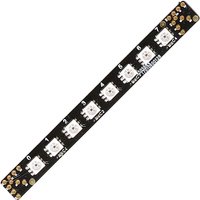 RasPiO InsPiRing Addressable LEDs for Raspberry Pi - RasPiO Straight-8 + Driver, The RasPiO InsPiRing range are a system of programmable RGB LED boards that can be connected together to make 2D and 3D shapes up to the limits of your imagination. This Straight-8 board has 8x LEDs on a 10cm strip with 10mm LED spacing and features SK9822 RGB LEDs. The board is designed with through-holes that enable the use of standard 2.54mm headers, although you can wire them directly should you wish. There are three sets of inputs and outputs so that multiple boards can be connected together at 180°, 90° or 45°. The module is driven using the included driver board that is pHAT sized and has a buffer chip to handle the 5V logic levels and a space for external power if required. RasPiO InsPiRing is controllable by most popular electronics platforms, including: Raspberry Pi and Python (or any other language), Arduino, ESP8266 (e.g. Wemos D1 mini), ATtiny (e.g. Digispark). The LED module is also controllable using your phone, if you're connected to a Wi-Fi-enabled device such as the Pi Zero W. Open a port on your router and you could switch on your ‘TV simulator’ if you’re away from home (make it look like someone’s home watching TV). Why not hook-up other control mechanisms such as light, motion, sound or temperature sensors to trigger your LEDs. There are a multitude of projects and applications that can use these lights. Embed them in any project that requires really fine control over colour and intensity of light, or maybe you could use it as a: Light pyramid, mood light, turn-signal/light system for your bicycle, internet clock (NTP), TV simulator security device, persistence of vision project, natural light alarm clock, controllable light source for macro photography/videography, christmas or other holiday decorative lighting, eye-catching wearable, and much, much more. RasPiO® InsPiRing Straight-8 + Driver RGB Addressable LEDs for Raspberry Pi