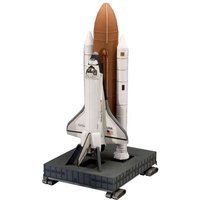 The first start a Space Shuttle into space took place on 12. April 1981 with the Space Shuttle Columbia. With the completion of further intensified the NASA Orbiter from 1983 their scientific and experimental and military strategic activities together with the US Air Force is considerable. There are communication and research satellite into space transported, repairs carried out on the spot as well as the American space station built and supplied. The Challenger was on 4. April 1983 for the first time in space. The Discovery lifted on 30. August 1984 for the first time. Since the 3. October 1985 was the fourth Space Shuttle Atlantis with 26 missions in use. The endeavor completed their first start at 7. May 1992. The Orbiter, a maximum of 28 days in space. By two tragic accidents in which the entire crew died, they went in 1986 and 2003, the Challenger Columbia lost. After a two-year interruption and extensive changes to the orbitern and on the main tank wuden the flights continued. With your landing on Edwards Air Force Base in California on 9. August 2005, 31. The Discovery flight and thus the 114. The NASA Space Shuttle mission completed successfully. With the resumption of shuttle flights over the next few years the development of the International Space Station ISS continued. For this purpose, the European space laboratory Columbus.This text is machine translated.