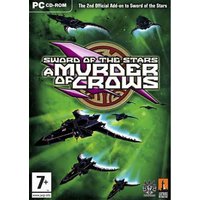 While the four civilized races battle back the voracious Zuul and seek advantage over each other, a ghost from the past returns to the galaxy in the form of the manipulative Morrigi. Already known for their dark crow-shaped attack drones and deadly traps, this race once thought long extinct, returns looking for vengeance. Using never-before-seen weapons, ships and tactics, the Morrigi fall upon the other five races of the Sword of the Stars universe, who must now adapt to the ancient masters of space or be destroyed. Time is of the essence as world after world falls to the black winged ships that surge out of the dark like A Murder of Crows. FEATURES A New Sixth race - The Morrigi, who appeared as a series of mysterious random events in Born of Blood (the first Sword of the Stars expansion pack), continues to evolve the ever-expanding Sword of the Stars universe New Ship Sections - Over a dozen new ship sections for all races to match against your opponents Unique ‘Grav Flock' Drive System for Morrigi Ships - The more Morrigi ships in a fleet, the faster they can travel, continuing the racial diversity unique to the Sword of the Stars gameplay experience 15 new weapons 27 new technologies and the new Xeno-Cultural and Drones tech trees Sword of the Stars gameplay continues to deepen with Civilian populations, independent worlds, Espionage options, and demands for planetary surrender Drone carrying ships in all three size classes Construction ships, a variety of orbital stations, spy ships, Police Cutters, and more A whole new set of GUI enhancements and additions

Sword Of The Stars - A Murder Of Crows