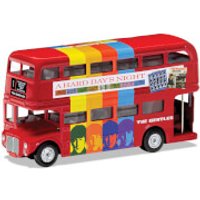 Released in 1964, ‘A Hard Day’s Night’ is the cinematic debut of The Beatles. A hyperactive telling of a fictional day in the life of The Beatles hectic lifestyle, the film went on to be hugely influential in the pop cultural landscape. This die-cast metal bus is wrapped in the colourful art from the iconic film poster that launched the film into the public consciousness.