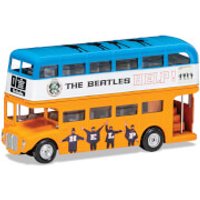 The second film starring The Beatles, ‘Help’ was released a mere year after ‘A Hard Days Night.’ Leaning far more into fantasy than the preceding film, ‘Help!’ is an absurdist comedy adventure that features the band at the height of their popularity. This die-cast metal bus features art from the original film poster in a striking body wrap.