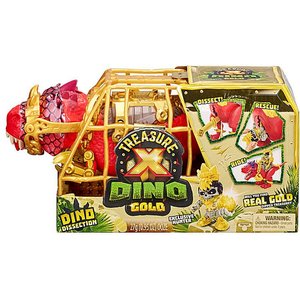 Take on the ultimate Treasure X Dino Gold adventure with the Dino Dissection! A Mega sized T-Rex has been captured in a Golden Cage but inside the Dino a Treasure Hunter is trapped! It's up to you to save him. There are 16 Levels of Adventure as you rescue the Hunter and turn the beast into a Battle Dino! First remove the cage from the mega Dino and carefully take off its muzzle and press the spike on its head to release the X-Key from its mouth. Now dissect the Dino and remove its belly to see what (or who) it has eaten! Cut open its belly with your sword and find the parts of the Treasure Hunter in the golden ooze. Rebuild the Hunter and use the armour and gear to build a Battle Dino that the Treasure Hunter can ride! Now pull the Dino's tail for one last surprise. The Dino has done a prehistoric poop! Take your dagger and smash the crackle outer layer to discover your Treasure inside an amber vessel. Use the X-Key to open the vessel and reveal your Treasure! Did you find a Prehistoric pest or the REAL Gold Meteor? There is a one in eight chance of finding REAL Gold dipped Treasure! Now roar into battle with your exclusive Hunter on his Battle Dino!