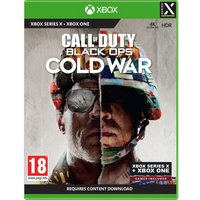 The Call of Duty series is back with a direct sequel to the critically acclaimed Call of Duty: Black Ops - Call of Duty: Black Ops Cold War. Take part in the volatile geopolitical struggle of the early 1980s and relive the maddening tension of the height of the Cold War. Complete the single-player campaign based on actual events, where you join the CIA in pursuit of an elusive Soviet spy Perseus, aiming to destabilise the global balance of power. Come face-to-face with historical figures including President Reagan and join action on epochal battlegrounds such as East Berlin, Vietnam, Turkey or the Soviet KGB headquarters. Uncover a global conspiracy alongside familiar characters Frank Woods, Alex Mason and Jason Hudson. Join millions of players in the next generation of Call of Duty multiplayer. Pick up the iconic Cold War era weapons and share the experience with friends across platforms and generations. Enjoy several new game modes as well as proven classics, including the Zombies mode.