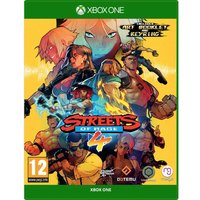 The latest in the series, Xbox One Streets of Rage 4 brings you even more beat'em'up action. The series is well known for it's thumping soundtracks, and this game is no exception. It's got new mechanics and improved visuals, so it looks and sounds great.This side-scrolling game has hand-drawn animations that look stunning, and loads of fresh music from a team of composers - the perfect soundtrack to frantic action. You can even play along to the music of the previous Streets of Rage games.As well as Axel, Blaze and Adam, you'll now meet Floyd Iraia and Cherry Hunter who are on a mission to clear the streets. There's 12 former Streets of Rage characters that can be unlocked. You can battle by yourself or with a friend online, or team up with four people offline to take control of the Wood Oak City.Enjoy stunning classic-style gameplay with a twist of brand-new mechanics.